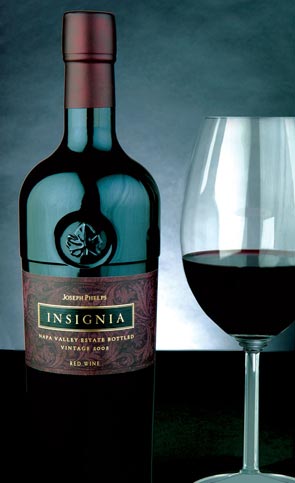 In the late 60s, Joseph Phelps was running one of the largest construction companies in the U.S. when he won the bid to build Souverain Winery (now Rutherford Hill) located a few miles outside of St. Helena. Enamored with the beautiful Napa Valley and contemplating a career change, in 1973 he bought the 600-acre Connolly cattle ranch in Spring Valley, and began planting vineyards. The winery was completed in 1974 and that same year the first Syrah was made, the first grapes were crushed at the new facility and the first Insignia was produced. It was a period of unparalleled activity, creativity, ingenuity, entrepreneurship and risk-taking and it put Joe Phelps on the map of top Napa Valley wine producers.

Insignia is the first proprietary Bordeaux-style blend produced in California. Each vintage is comprised of the best grapes from Joseph Phelps Vineyards, first from both grower and estate fruit, and beginning with the 2004 vintage, from entirely estate-grown fruit sources. Insignia is a Cabernet Sauvignon based wine crafted from six of the Joseph Phelps estate vineyards: Spring Valley Ranch Vineyard in St. Helena, Banca Dorada Vineyard on the Rutherford Bench, Las Rocas and Barboza Vineyards in the Stags Leap District, Yountville Vineyard in the Oak Knoll District and Suscol Vineyard in South Napa Valley.

“Firm, dense and deeply concentrated, this offers a powerful thrust of flavors, with mocha- and espresso-laced blackberry, black licorice and cedar notes, revving up on the finish. Long, pure, driven and persistent, this seems set for a long life. Best to cellar. Cabernet Sauvignon, Petit Verdot, Merlot and Malbec. Best from 2015 through 2028.” 94 points, Wine Spectator

“The 2010 Insignia is striking. Cool, mineral notes frame a core of blue and black fruit, licorice, spices, smoke, and melted road tar as this stunning wine opens up in the glass. Totally alive in the glass, the 2010 captures the essence of this cold, late harvest. Hints of menthol, violets and crushed rocks all flow through to the incisive, vibrant finish. My sense is that the 2010 is still holding back much of its significant potential. The 2010 is 85% Cabernet Sauvignon, 10% Petit Verdot, 3% Merlot and 2% Malbec. Anticipated maturity: 2017-2030 “ 93-95 points -Wine Advocate

Nicolay has made more than a career out of wine, it is a way of life. Having studied under Sandy Block MW at Boston University and having accrued knowledge and experience over the 8 years that he has been at Colonial Spirits, you can say he is easily on his way to becoming more than an enthusiast. Whether it is New World or Old World wines you are looking for Nicolay is more than happy to help you make your selection.