Perhaps the most ‘organic’ of all is Tequila…

Tequila seems to be quietly awaiting some attention as the interest in barrel aged spirits continues to grow.  Mostly left behind in the market today Tequila exists for many as a youthful memory of an upset stomach.  The category has also been lead for many years by a well-known brand which barley qualifies as Tequila and isn’t the traditionally crafted spirit that Mexico is so proud of.

In short, Tequila is amazing.  It’s a must try.  Tequila production is limited to a relatively small area in the western central highlands of Mexico in and around the city of Tequila.  It is made exclusively from the agave plant (always be sure that the bottle you choose is labeled ‘100% agave) and shows the unique characteristics of the land where the plant was grown (the growing region is about twice as large as the production region).  In few spirits is terroir as evident as it is in tequila.

Agave is a hardy, earthy, herbaceous dessert plant that takes around ten years to mature to where it is ready for harvest.

Harvesting is hard work and after the pointed leaves are cut away the heart of the plant resembles a pineapple (and is called a piña) weighing in at as much as 200 pounds.  These enormous piñas are packed into an oven and slowly baked.  When cooking completes the piñas must be mashed, traditionally done with large stone wheels.  The pulp is a great compost / livestock feed and the agave juice is the nectar of Tequila.

Tequila has been around since the 16th century and is one of the first native spirits of our continent.  From sweet and fruity to rich herbaceous earthiness the character of Tequila is rich in history and the land from which it is born.  Most Tequila is sold in is natural clear ‘blanco’ state but flavors are further developed in ‘Reposado’ and ‘Añejo’ offerings which are, respectively ‘rested’ from 2 to 12 months or ‘aged’ from 1 to 3 years in oak barrels.  Reposado Tequilas are my favorite, maintaining the boldness of the agave with more complexity and a more mellow alcohol.  It’s not unreasonable to mix a reposado, but they are perfect for sipping.

Tequila is a world class spirit.

Bourbon – a distinctive product of the United States (said Congress in 1964) – is an historic American product with a storied past going back hundreds of years, even though it has been a mere half century since Congress made it official.  Until recently, in the liquor industry, American whiskies in general faced stiff competition from centuries old distilleries in a great whisky country across the Atlantic and less expensive, ‘smoother’ tasting whiskey from our neighbors in the north.  Not to mention the prevailing thirst for vodka, gin and rum.  In no more than the last five years American whiskey has been an American renaissance.  Bourbon seems to have inspired this cultural rebirth and it is an exciting time to be an enthusiast.

If you are not an enthusiast yourself, it’s likely that you know someone who is.  So, somebody in your life excited about Bourbon.  Even if that somebody is you there is little doubt that a fine bottle is a superb gift, and is acceptable at any time for any reason.  The only challenge is figuring out which one to add to your collection.

To be Bourbon the spirit must be produced following legal guidelines.  One such requirement is that the distillation is to no more than 160 proof (80%abv).   By distilling to a lower proof than other spirits, like vodka (commonly distilled to 190 proof), the flavors of the grains are highlighted.  Grains such as corn, rye, wheat and barley are used in Bourbon and have a big impact on the flavor profile.

There are all kinds of things that give rise to the finer flavors, the subtle differences and the character of a Bourbon.  From the yeast strain to the barreling proof to the barrel itself… and on the list goes.  However interesting these variables are, it can be a bit much to decipher.  I find it easier, and realistic to simplify and perhaps generalize a little.  The grains, or ‘mash bill’ are a great basic guide through Bourbon and American whiskey.

I am indeed simplifying, but it is reasonable to say that there are just few fundamental styles of Bourbon: classic Bourbon, high-rye Bourbon and wheated Bourbon.  Again generalizing, classic Bourbon will have a high percentage of corn in the mash (say 75%+) with some rye and barley filling the remainder.  High-rye Bourbon is similar but with a greater proportion of rye at the expense of corn (say 25%+ rye).  Wheated Bourbon might look quite like the classic recipe, but with wheat instead of rye.

The mash really is the whiskey at conception so knowing what each grain brings to the party is quite useful.  Keeping with the theme of an easy guide, here are some qualities for each of the three above-mentioned grains:

Corn – The major contributor, and the base of all Bourbon (because Bourbon must be at least 51% corn).  It is a rich, sweet flavor that really brings forth the body and sweetness in the whiskey.

Rye – Big flavor and bite (have you ever had rye bread?), this is the grain that brings spiciness, and zest and maybe a little ‘bite’.

Wheat – A soft and well rounded grain that lets the sweetness of the corn show, while contributing a kind mouth feel and great support for the caramel and vanilla flavors from the barrel.

Now that you have a basic map, choosing your next bottle should be easy…  As long as you know, which brand falls into which category! Here are a few examples:

Gin is a spirit most commonly associated with juniper berries, indeed the name itself, ‘Gin’, is derived from the Dutch ‘jenever’, meaning juniper.  The drink has been around for centuries if not millennia and likely began as a form of medicine.  Today gin is growing out of its image as a dry, one dimensional, 80 proof alcohol made for either martinis or tonic.  I must admit that I have always found that mold a bit boring.

The gin world is dominated by familiar brand names like Beefeater, Bombay and Tanqueray.  These products shape the way gin is perceived and are, categorically, the same.  As ‘London’ Gins we primarily see variations only in the sweetness of the product.  London Gin, also called London Dry or simply Dry Gin, is a grain neutral spirit that has been re-distilled in the presence of natural herbs used for flavor (juniper always being the most prominent).  The legal definition of gin requires the characteristic flavor of juniper berries.  It is because the base spirit can be distilled from many forms of sugar (beets, cane, potatoes, grapes, etc.) that we find different flavors among Dry gins – and the above-mentioned brands are fine examples.

There exist a number of other gin designations, defined by the geographical origin of the product or even cultural significance.  Plymouth Gin and sloe gin are respective examples.  Along with these numerous variations is a rich history from medicine, to social disruption to disreputable bars that served gin of the lowest quality standards, even gin flavored with turpentine instead of juniper.  Riots erupted in the 18th century when  gin taxes imposed upon the popular drink of the time.  Phrases that survive today (gin-mills, gin soaked drunks, mother’s ruin) grew out of the negative reputation of gin in London.

Upmarket bars brought gin to prominence in the era of real cocktails – an era that is seeing a great resurgence.  Still, my early experience with gin just didn’t uncover much more than varied levels of sweetness.  Genever was the first type of gin to spark some interest in the category with me.  Oude Genever (or Jenever, Holland or Dutch Gin) is distilled from a grain mash akin to whiskey and is often aged in wood barrels.  Such a gin is not for martinis, but for classic, traditional cocktails – the kind that used to be found in New York City bars and haunts for the likes of Don Draper.  Perhaps there was more to gin than I had imagined?

In an article written by an Oregon distiller and shared with me by a longtime customer, the author makes an argument for creating a new term for the nascent gin revival: “New Western Gin”.  The proposed categorization of a new identity of Gin really grabbed my attention.  Suddenly it was clear that Gin is really becoming interesting as distillers strive to show their own expression of the spirit.  Although juniper is the required dominant flavor, the wealth of herbs and botanicals allowed in gin create the opportunity for countless flavors to not only be included, but to come oh-so close to sharing the lead role.  Hendrick’s Gin, with its distinct cucumber flavor is an easy example to cite and its immense popularity means that new gins are catching on.

We have fresh batches of beer for you today, including some new faces to Colonial Spirits.  Stoneface Brewing is also now ALL 16 oz. cans!!!! 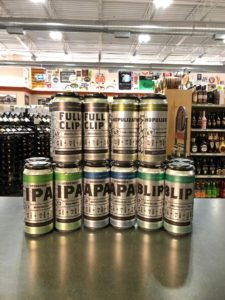 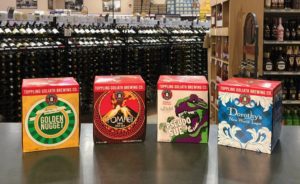 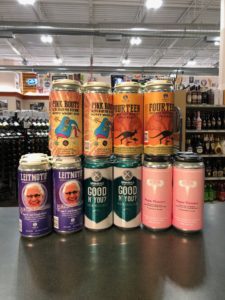 Irish American, a Lesser Known Irish Whiskey Producer Will be Here Next Week! 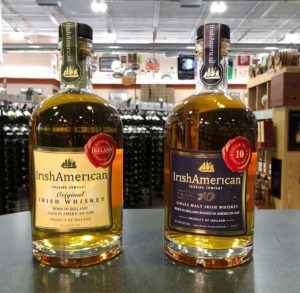 Due to the weather yesterday, we had to cancel the tasting but we will be still having it next week.  We didn’t want to deprive our customers of tasting these excellent products!  Just because it’s past St. Patrick’s Day, doesn’t mean you can’t still be Irish for a night! 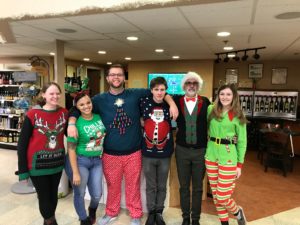 A sincere Merry Christmas and Happy Holidays to you and your family from the team at Colonial Spirits! We hope everyone finds their stretch pants! Eat, drink and be merry!